The transition from the last version of the Nighthawks to the current line up went smoothly over the summer of 2018, as Paul Bell and Johnny Castle chose to stay off the road but stay active locally. As often as possible Dan Hovey and Paul Bell played together that summer. Dan had always been the guest guitarist for the traditional pre-Thanksgiving event in Kensington, Maryland and had subbed for Paul several times. By the Fall, Dan was holding down the core of the tunes and Paul was free to add the spice.

As Johnny brought his focus to his own band, the Thrillbillys, Paul Pisciotta took over holding down the big bottom. Paul P was no stranger to the band, having just missed joining in 1974 after auditioning the same day as Jan Zukowski. Mark remembered listening to him in the early ‘60s when Paul was playing with Robert Gordon in the Confidentials. He and Mark Stutso, now with a decade under his belt, quickly became a rock solid and swinging rhythm section virtually overnight. Both his own vocal harmony and Dan’s relaxed yet powerful baritone has taken the three and four part harmony to new heights.

Eclectic? All over the map? The material on All You Gotta Do, The Nighthawks’ 2017 release, can certainly be described in these terms. Yet, throughout the nearly five decades of its career, the band has sourced songs from everywhere and anywhere. The prototype recording, Rock and Roll, although it had no originals, established this template in 1974. Three years later, Sidepocket Shot, showed the band capable of nearly all original material and spanning an even wider range of genres, this time in an array of production styles a la the Beatles’ Revolver. All You Gotta Do does not have any outside players, only the band itself, with a minimum of overdubs. Yet the band still sounds like a hard Chicago Blues band from the mid-1950s, adding the vocal harmonies that Miss Honey Piazza once dubbed “the Doo Wop Blues.”

The Nighthawks 2015 release “Back Porch Party” was recorded “live and acoustic” in the studio, the band running through a dozen songs that include five originals as well as covers of classic tunes by Muddy Waters, Lightnin’ Slim, Willie Dixon, Ike Turner, and Jimmy Rogers. A couple of performances defy expectations, even for a band as flexible as the Nighthawks – their own version of “Down In The Hole,” better known as the theme from the acclaimed HBO series The Wire, and the Patsy Cline gem “Walkin’ After Midnight.”

Available now in the merch store!

“444” draws on the deep roots the band has always mined: an organic mix of originals and classic cover tunes. Produced by the band and recorded at Montrose Studios in Richmond VA, 444 is jam-packed with 13 tracks of blues, soul, rock ‘n roll, and roadhouse country music – all given the trademark Nighthawks combination of talent, passion, energy and showmanship that has made the Blues Music Award winners a truly one-of-a-kind listening experience.

Blues Bytes – The Tattoos of the Blues – Part 1

Blues Bytes – The Tattoos of the Blues – Part 2

Blues Bytes – the Tattoos of the Blues – Part 3

“Damn Good Time is one of the best roots records of the year from a bunch of blues-tinged roaddawgs who still know how to rock”. – By Grant Britt

“… this is as good as anything the band’s ever done and portends even better ’cause there’s an extra something present…” – by Mark S. Tucker

“… The Nighthawks are a band that I must admit I have not paid a lot of attention to in the past, but, hey, maybe I have been missing something all these years! This really excellent release by one of the hardest working bands around is a real revelation”. – Phil Wight, Blues & Rhythm (UK)

“This one’s a roots rocker with that blues driven sound that drove the ‘50s into the history books and gave birth to rock and roll as we know it. It’s seminal, it’s organic and The Nighthawks have been doing it for 40 years.”-Robert Carraher

Damn Good Time is NOW AVAILABLE on the Hawks website!

The Nighthawks have announced that their founding leader, Mark Wenner, has undergone successful heart bypass surgery and is expected to make a complete recovery. Because of the operation, Mark will stay off the road for approximately six weeks while he recovers, and the band has postponed the affected dates. The Nighthawks are expected to resume touring the end of May or early June.

Mark Wenner’s condition was diagnosed on Monday, April 9 when he went in for an angiogram/angioplasty and doctors discovered he needed the bypass operation, which was done the following day. Because they caught it early, the doctors feel very confident that his prognosis for a full recovery is excellent.

The Nighthawks debut CD for Severn Records, Damn Good Time, is scheduled for release on May 15, and the band had already scheduled a number of shows around the country to support its release. Damn Good Time is the follow-up to The Nighthawks’ Last Train to Bluesville, which garnered the band its first-ever Blues Music Award from the Blues Foundation as Acoustic Blues Album of the Year in May 2011.

Singer/harmonica player Mark Wenner is the founder of The Nighthawks, whose members also include guitarist Paul Bell, bassist Johnny Castle and drummer Mark Stutso. The new CD features a number of originals and cover songs ranging from blues and soul to rock and rhythm and blues.

Fans can keep track of Mark Wenner’s recovery by visiting the band’s website at www.thenighthawks.com or their Facebook page, where they can also send him get-well wishes: http://www.facebook.com/pages/The-Nighthawks/366038142091

ANNAPOLIS, MD – Severn Records announces a May 15 release date for Damn Good Time, the label debut from seminal American roots music band, The Nighthawks, distributed in the U.S. by City Hall Records. Damn Good Time is the follow-up to The Nighthawks’ Last Train to Bluesville, which garnered the band its first-ever Blues Music Award from the Blues Foundation as Acoustic Blues Album of the Year in May 2011. 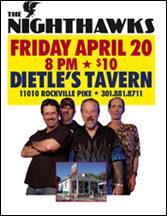 Come on out and hang with the Hawks for a rare appearance in Rockville at Dietle’s Tavern on Friday April 20th. Get there early–it will be packed! See you there. 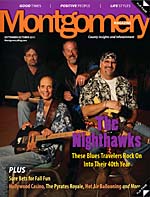