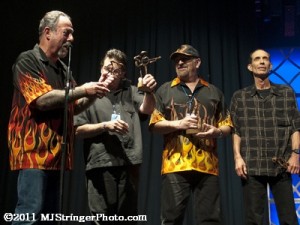 Accepting the Blues Music Award for "Last Train to Bluesville"

Yes, you did it. Got us to the stage in Memphis. What a night, what a night.

None of us thought we’d actually win, not with the caliber of talent in the Acoustic Album category–heck, in any other category, for that matter. It’s pretty hard to describe what it felt like as we saw (on the big screen, a nanosecond before we heard it) our name read as the winners. 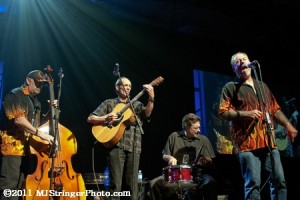 And then we had to calm down, sort of, and get ready to play for that big room full of legendary and becoming-legendary talent. Not to mention for everyone listening live on Sirius XM, like Elaine Stutso, who heard it in the driveway on the car radio. We believe her when she says it sounded awesome. 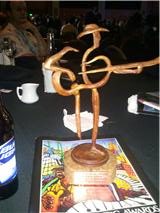 We missed having Elaine, Holly and Jana there. Johnny took this photo of his award–after he called Jana. It was a moment of deep connection, to families, friends and fans.

We felt the love!

In the 32 years since the inception of the Blues Music Awards (formerly known as the W.C. Handy Awards), legendary Washington, D.C., band The Nighthawks had never even been nominated before in any category. That all changed when the 2011 nominations were announced late last year, as the group’s Last Train to Bluesville album, released in February 2010, was nominated for “Acoustic Album of the Year.” And on May 5 in Memphis at the annual Blues Foundation awards presentation, The Nighthawks heard their name read as the winner. Amid whoops and hollers from the packed audience at the Cook Convention Center, Mark Wenner, Paul Bell, Johnny Castle and Mark Stutso proudly bounded to the stage to accept their first-ever Blues Music Award. Later that night, The Nighthawks performed two songs from the album to the Convention Center audience and to listeners of the live broadcast on Sirius XM’s B.B. King’s Bluesville channel. (See press page for full release)

Wow! We just won three awards at the Wammies — the Washington Area Music Awards. Paul Bell beat fellow nominee Mark Wenner for blues instrumentalist, and the band won best blues group and best blues album for “Last Train to Bluesville.” We cannot thank you enough for all the support you give us.

But now we really need your help to win in the Majors: The Blues Foundation Awards in Memphis. Voting ends at 7:59 p.m. Central Time on Tuesday, March 1. You must be a member of the Blues Foundation to vote. But just $25 makes you part of the international blues family. In addition to sponsoring the Blues Music Awards, the Blues Hall of Fame, the International Blues Challenge and the Keeping the Blues Alive Awards, the foundation’s work includes the HART Fund, which provides the blues community with medical assistance; the Sound Healthcare insurance program; Blues in the Schools; and Generation Blues scholarships. And you get the satisfaction of truly supporting the music you love.
Signing up is easy. Just go to http://www.blues.org/bluesmusicawards/vote.php#ref=members_index.
You’ll get a membership number. Then click on Blues Music Awards in the left-hand corner of the home page, and click on “vote” in the list on the left. OR just go here: http://www.blues.org/bluesmusicawards/vote.php#ref=bluesmusicawards_vote.

“Last Train to Bluesville” is nominated in the acoustic blues category, but don’t forget to go through and voice your choice in all the other categories as well.
The awards will be presented on May 5, and we’ll be there with bells on.
Thank you all!
Mark, Paul, Johnny and Mark

It’s been a long time comin’ but we finally got our new website up and running. We’ll be updating and adding more content as we go, so look around, check it out!

2010 has been a landmark year in many ways for seminal American roots band The Nighthawks, culminating with the announcement last Wednesday from the Blues Foundation that the group has received its first-ever Blues Music Award nomination. The band’s February 9, 2010 release on Rip Bang Records, Last Train to Bluesville, recorded live at Sirius XM satellite radio studios in Washington, has been nominated as Acoustic Album of the Year. The album features down-home versions of 10 blues classics from such artists as Muddy Waters, Bo Diddley, Slim Harpo, Chuck Berry, Sonny Boy Williamson and James Brown, among others. Recorded with the intimate feeling of a back-porch setting, Last Train to Bluesville bristles with all the energy of a live gig and the world-class performances that Nighthawks fans from around the world have come to expect. The 2011 Blues Music Awards will be presented in Memphis, Tennessee, on May 5. 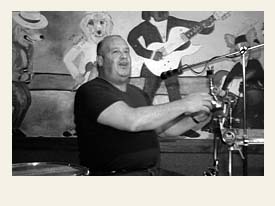 Pete Ragusa has decided to leave The Nighthawks after a fabulous 35-year run. There is no doubt that Pete’s departure is a big loss and he will be missed. The Nighthawks are incredibly lucky to have gained Mark Stutso – a great drummer and a great vocalist (both lead and harmony) and former drummer with Jimmy Thackery and the Drivers (for 18 years). Mark has been rehearsing and playing with the band since Pete’s departure and The Nighthawks are taking full advantage of this change to take the band to a new level.

The Nighthawks are happy to announce their new CD, “Last Train to Bluesville.” It was recorded live this year at B.B. King’s Bluesville channel on Sirius/XM satellite radio. Some of the tracks have already received airplay as Bluesville’s “Homemade Blues Jams.”

The session was done without amps or electric instruments. Paul Bell played his beautiful National Steel resonator guitar, Johnny Castle thumped his Clevenger upright bass, Pete Ragusa used brushes on a parade snare drum and Mark Wenner blasted away on his custom-tuned Hohner harmonicas without a mic! Although many of the tunes have been on previous Nighthawks recordings, we never played them like this. The selections lean bluesy, with several Muddy Waters classics plus Little Walter and Sonny Boy, along with Bo Diddley, Chuck Berry and James Brown.